Drones are all the rage today. Not a day goes by that we don’t read about someone using a drone for something (good or bad) somewhere on Earth. AI or Artificial Intelligence has also made a resurgence. I say that because there was a time, not too long ago (about 7 years ago) when AI was also very popular and a number of movies featuring AI were produced by Hollywood.

Now if we combine the two, what do we get? It’s like a collision of two giants, and both freaking people out around the world. That being said, let’s bring it back down to reality.

Drones are going to become killer swarms and will undoubtedly change warfare as we know it. AI, as we know it, is less likely to cause any major damage, and is unlikely to steal thousands of jobs, at least not anytime soon. When we speak of AI today, we are really speaking about Psuedo AI, and by that, I mean: I have given my computer a set of choices that it can make when presented with a given situation. It does not mean that the computer, on its own, will figure out how to handle things in a new situation for which is has never been told what to do, we are simply not there yet.

To give you a little confidence about this, imagine I give my two-year-old child a ball, but I don’t give the child any further instructions, I simply hand the ball to the child. Without knowing what a ball is, and without ever touching one, very quickly the child will learn that the ball is round, it is smooth, it can roll, and eventually they will learn that it might be bouncy and if they roll it against something with enough force it might roll back to them!

However, if we look at a drone, and we put a drone into a certain environment, for example midstream oil and gas, and ask it to fly from point A to point B, it may fly well, but it will not understand that it is flying over a pipeline anymore than it is flying over a football field. The drone can only respond to stimuli that it receives from its sensors and then take an action which is predetermined in its logic. This can get very detailed and very complex, but it is hardly AI and the drone doesn’t have a neural network that is “learning”… or maybe it does.

There is at least one area on some drones flying today, where we are making great progress in teaching these systems and that is in the area of computer vision. Using advanced Neural Networks (and maybe other similar concepts), we can train a drone to recognize objects that are important to us, objects which might be difficult for a regular person to spot on a regular basis.

Imagine a drone that can fly 100km from point A to point B, exactly the same way, with a deviation of 20cm, daily. What might that drone see? Could it provide information beneficial to a pipeline operator?

Let’s imagine for the moment that we have a section of pipeline which is above ground, running for 1000km. Using methods available today, the pipeline manager might send out a helicopter or fixed wing aircraft, maybe even some teams on the ground to inspect all of the pipeline. These teams would take video, pictures, and handwritten notes. None of the data would be uniform, and none of it would be easily organized, and the potential for missing data is high.

If we go back to our drone scenario, we have our robotic aerial vehicle flying this 1000km, every day. It is gathering extremely high-quality, precision images of the pipeline. Using a baseline set of data from its first flight, it can then track any changes which happen to the pipeline. Suddenly some amazing things start to happen.

The pipeline operation is getting actionable, efficient data, on a regular basis, and more than that, he is getting predictive data or predictive analytics, the results of an AI/Machine Learning process of teaching the drone what the pipeline looks like, what features are important, making certain thresholds for those features. The drone has become not only a very valuable asset, but potentially a life saver and most certainly a big cost saver.

Once the drone knows what corrosion and pitting look like, it can spot it again, and even better, it can track previous targets by knowing where they are, then its AI model can ask itself the question “Has the corrosion at pipeline mile 2453A grown? Stayed the same? Or declined since the last time I saw it?  The answer will be given to the pipeline integrity manager with visual evidence to prove it. This is but one example, and many we will still need to learn how to develop.

This is a developing and emerging technology. Drones will get smarter, sensors will get smaller, and software will get better, but the writing is on the wall. If you have a long-range asset like an oil or natural gas pipeline, and you are not using long-range drones for asset management, you are behind the times.

Bridging the Gap Between Customer Expectations and Reality in Telco, with Conversational AI

Headless Commerce: A ‘Best of Both Worlds’ Approach for Manufacturers 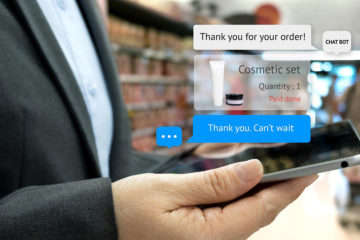 4 Evolving Technologies That Are Empowering Chatbots

ITP2.1 and the Future of Data as We Know It