The ownership of the data might be, for the first time, handled by individual users in a controllable way.

Tell us about your interaction with smart technologies such as AI and blockchain.

I’ve been involved with technology from my first job in Jump Trading, where I used data mining and heuristic algorithm for financial modeling. I started looking at blockchain in the early days of Bitcoin. And I soon turned from an investor in Bitcoin/ETH mining, to personally getting involved in the space to push forward the idea of blockchain as I think it’s a technology with a massive potential on hand.

How did you start in this space? What galvanized you to be part of the blockchain community?

When I learnt Bitcoin/blockchain and what had been changed in peer-to-peer transactions from a dear friend, my first thought was that the technology was going to change the whole Wall Street and the way people run financial services. As I dig further into it, thanks to my mathematics background, I am no stranger to realize the potential of blockchain as a potential backbone of an even more general area than finance for most, if not all, database.

In fact, when you come to think of it, many of the world’s systems are in one way or another built upon database. A shift from the traditional centralized model to an open and decentralized model is definitely going to be pivotal in history. I wanted to be a part of the change, which is why I decided to join the community and be the CEO of V SYSTEMS. Our project is the first general database blockchain project.

What is V SYSTEMS and how it is impacting the FinTech industry?

V SYSTEMS is a blockchain database cloud project that aims to create a brand new digital economy era with billions of blockchains underpinning society. Our team is led by Sunny King, who was the creator of Proof of Stake (PoS) consensus in cryptocurrency. He has designed an elevated version of PoS, Supernode Proof of Stake (SPoS). Using SPoS, we are delivering the world’s first object-oriented general-purpose distributed database, which is empowered to carry complex decentralized applications.

This is bound to bring a huge impact to the industry, just like how PoS garnered a gigantic amount of adoption since its creation because with SPoS and our modular design, anyone, even people with limited coding knowledge, can easily create blockchains. The usage of that for decentralized applications is unlimited.

Tell us more about “Proof of Stake” and what is the consensus opportunity in PoS.

Proof of Stake was created by Sunny King in his Peercoin project. In PoS-based cryptocurrencies, the creator of the next block is selected via a combination of random selection and the stake (e.g. wealth or coin age). Compared to PoW where people are competing on computational power, PoS breaks the linkage between mining and excessive energy consumption. Taking out the constraint of energy, PoS model is much more scalable and can, therefore, expand to much wider usage.

After the creation of PoS, it has since attracted massive adoption. According to research by Crypto Research in June 2018, 21% of global top 100 cryptocurrencies are using PoS as the consensus mechanism, 10% are using PoS and PoW hybrid, while 7% are using delegated PoS. Even Ethereum is now shifting to a PoS model. This is proof as to why PoS could and should serve as the base layer of blockchain in order to make it scalable. What we’re developing now – SPoS, is an elevated version of PoS, which is even more stable and scalable, and in the minting process giving coin owners rewards, creating a self-governing ecosystem.

How do you see the raging trend of including blockchain in enterprise digital transformation?

It is definitely happening. And this is also what we are trying to achieve here at V SYSTEMS. We are developing support for enterprise-level decentralized applications, as we believe that enterprises are looking for an easy entry to blockchain. In fact, businesses of any areas can also be benefited by blockchain, as long as there’s database involved, blockchain could help.

What are the biggest challenges and opportunities for businesses in leveraging blockchain?

Scalability and stability are in our opinions two of the biggest challenges for businesses. Enterprises have a very high stake to risk for a shift to blockchain. Blockchain must be proven to be extremely stable, while scalable enough to take care of the massive data flow. At V SYSTEMS, we’re solving these two issues through SPoS. PoS has already solved the scalability issue, but SPoS is bringing it to another level.

Supernodes are very stable and high-functioning by design, which, in turn, brings a very high level of stability. After our mainnet and supernode launch in September 2018, they are showing really promising data, with industrial level TPS and production of one block per 4 seconds. It’s much more stable than most public chains, with a block production success rate of 99+% and an average delay of less than 0.1 second.

For opportunities, it’s unlimited. Any business, regardless of size, is in some ways leveraging database, even in tiny ways such as storing employee information. Blockchain opens up the centralized system to a safer decentralized environment, making data much more resistant to attacks.

How should young technology professionals train themselves to work better with FinTech?

There are lots of resources online and also we’re seeing more institutions, such as universities, offering education on FinTech. I’ve also helped to set up a Blockchain Lab with a group of industrial institutions for SUSTech, Shenzhen, in 2016, one of the first research center among Chinese universities. In my opinion, this is a two-way work. Young professionals have to educate themselves, but also the FinTech industry bears the responsibility to make FinTech more approachable and comprehensible. I’m glad this is happening now and there’s a wave of talents coming into FinTech.

What is the biggest challenge to Fintech transformation in 2019? How does V SYSTEMS contribute to a successful digital transformation?

There are more and more projects coming into the FinTech space. It’s not necessarily a challenge, but it’s definitely harder for a business to stand out among the sea of FinTech companies. On the bright side though, it’s a good thing, more competition pushes for better technologies, and, in turn, pushes the FinTech transformation. What we’re doing here at V SYSTEMS is we’re bringing what the market needs – it’s more than just blockchain, it’s blockchain that’s easy to create. We are here to enable anyone to create blockchain at fingertip.

Where do you see Blockchain and AI/Machine learning and other smart technologies heading beyond 2020?

Blockchain can definitely boost AI development in terms of data sources and management. The ownership of the data might be, for the first time, handled by individual users in a controllable way. The exchange of the data can be better monetized with the aid of blockchain database. More use cases are coming along, many industries will be impacted by these smart technologies. There are many prototypes in development already. By 2020, I expect to see more than just tests and prototypes, but instead actual implementation of these technologies.

The Good, Bad and Ugly about Blockchain that you have heard or predict –

There are too many “goods” to talk about — security, transparency etc. But so far it’s still pretty much just talks, without actual implementation. One of the major reasons is that the technology, to many, is still a very unfamiliar concept. Many people do not grasp the idea of a decentralized database, and think that blockchain is something unreachable. That’s what we are aiming to solve — by designing our database cloud with a modular structure, hopefully, we are removing the entry barrier and let people create blockchains with just a flick of the finger.

What technologies within AI and Blockchain Technology are you interested in?

Smart contract is an area in blockchain that I think will continue to grow in the coming years. As this technology matures, blockchain’s application would be greatly extended, as this helps materialize the advantage of “digitization”.

Another area is mainchain/sidechain in blockchain. By developing a seamless relationship between the two, DApps can function smoothly in a blockchain environment. Sidechains greatly extend the functionality and improve scalability. By running in parallel to mainchains, specialty activities can take place without involving the whole blockchain.

As a tech leader, what industries you think would be fastest in adopting FinTech with smooth efficiency? What are the new emerging markets for these technology markets?

The finance industry is undoubtedly pouring the largest amount of investment into developing blockchain/FinTech. This is mainly because of the massive cost-saving that blockchain could bring to the space. We’ll soon see on the market new virtual economy tools built on blockchains that enable people to do transactions in an easier and more efficient way. But at the same time, they have to work very closely with regulators to make sure privacy and customers are protected.

Thank you, Alex! That was fun and hope to see you back on AiThority soon.

Dr Alex Yang is a FinTech entrepreneur and investor with over 14 years of experience in banking and finance, during which time he has sponsored many world-leading blockchain foundations. As CEO of V SYSTEMS, Alex is leading a project to solve the core scalability and stability problems that currently hold back widespread blockchain adoption. V SYSTEMS was founded by Sunny King, the legendary developer and creator of Proof-of-Stake consensus.

Prior to his role at V SYSTEMS, Alex was the founder and CEO of Fund V, one of the first token funds to focus on blockchain companies and related investment opportunities. He was also the founding partner of Beam VC and CyberCarrier Capital which together have successfully invested in over 30 startups in the TMT sector.

Prior to moving into venture capital investing, Alex was based in Hong Kong as head of APAC structured rates trading at Nomura International, and VP of exotic derivatives trading at UBS.

Alex is a China Fellow of the Aspen Institute, a founding director of the Hong Kong Financial Association and a deputy director of the Innovation Center for Data Science at Southern University of Science and Technology in Shenzhen. He teaches risk management and related courses at Peking and Tsinghua universities.

Alex has a PhD from Northwestern University and a BA in Mathematics from Peking University. 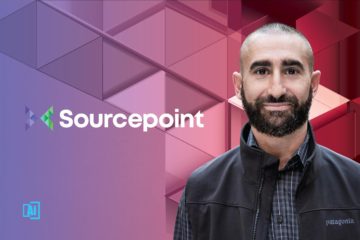 AiThority Interview with Ben Barokas, CEO and Co-founder at Sourcepoint

AiThority Interview with Josh Koenig, Co-Founder and Head of Product at Pantheon