One of the most powerful ways is to use AI itself to generate and modify neural networks in response to incoming data (similar to the plasticity of the human brain in response to external stimuli).

Tell us about your journey into AI and intelligent technology. How did you arrive at Darwin AI?

The University of Waterloo (UW) is central to this narrative as most of our team, including our founders, are Waterloo alumni. After graduating from UW in 2001, I started a company with five partners called Infusion that developed custom software for corporate clients, initially in the financial services sector. Gradually, we grew the company to 650 people before its acquisition by Avanade last year.

Towards the end of my tenure, I began applying deep learning solutions to the enterprise, which caught the attention of Arif Virani (now our COO), who worked at Infusion years prior before pursuing his MBA at Wharton followed by management consulting at McKinsey. Arif, who was an advisor to Darwin at the time, insisted I meet his ‘friend Alex’ who was doing amazing things with artificial intelligence in an academic capacity at Waterloo.

Thus, in March 2017 I found myself in Professor Alex Wong’s lab just off campus. His credentials spoke for themselves: assistant professor, a founding member of Waterloo’s Artificial Intelligence Institute and the Canada Research Chair in Artificial Intelligence. But even more impressive than his CV was what he and his team showed me that first day: 20 powerful ‘perception’ networks running simultaneously on a single chip.

As deep learning neural networks require substantial computing resources to run, this demo was truly astounding and, in that moment, I knew I was in the presence of a special team and technology and simply had to get involved.

The company structure was formalized in the summer of 2017, we entered the Creative Destruction Lab (CDL) program shortly thereafter, which eventually resulted in our seed funding and the construction of our present team.

DarwinAI is an Artificial Intelligence startup based out of Waterloo, Ontario, Canada that focuses on deep learning design, optimization, and explainability.

The company was founded by a team of Waterloo alumni, including Dr. Alexander Wong, a professor at the University of Waterloo, Sheldon Fernandez, co-founder of Infusion, a software consultancy firm that was acquired by Avanade last year and Arif Virani, a former McKinsey & Company technology consultant to Fortune 500 Companies.

What are the pillars of your AI development platform?

Together, these core offerings enable powerful deep neural networks to be deployed in edge-based scenarios where computational and bandwidth resources are limited.

How can machines learn faster and better? How do you ensure the use of AI for scalable learning for all machines and devices?

One of the most powerful ways is to use AI itself to generate and modify neural networks in response to incoming data (similar to the plasticity of the human brain in response to external stimuli).  Our Generative Synthesis IP is the foundation of our attempts to achieve this lofty goal.

Which is harder – choosing machine-level intelligence or working with them? How does Darwin AI make this easy for tech buyers?

At the moment, identifying the right neural network model for a given task is as hard as training it for said task.  Our platform allows developers to collaborate with AI via Generative Synthesis to both evaluate and generate models for specialized tasks, greatly simplifying the process of choosing the ‘right’ machine-level intelligence.

To what extent are humans responsible for making AI do the unachievable?

At the moment, one could claim we are entirely responsible, insofar as humans create the AI that does the ‘achieving’. For example, about five years ago, very few people in the AI community believed that a machine could play the game of Go at the World Championship level. Then, the people at DeepMind created AlphaGo, which not only defeated the World Champion, Lee Sodol, but quickly achieved superhuman performance in the game. In this sense, the DeepMind team were responsible for achieving the ‘unachievable’.

A provocative question in the years ahead, however, centers on AI that creates AI (and so on). In such a case, can humans claim responsibility for the final creation?  The answer is as much technical as it is philosophical…

As a mentor in the tech industry, how should professionals train themselves to work better with AI and Automation?

Primarily, it is important to recognize the strengths and weaknesses of AI as they apply to automation.  At the moment, AI excels in scenarios with clearly defined outcomes, quantifiable results, and large datasets to enable prediction. It does less well with qualitative situations that cannot be concretely described.

Two examples illustrate this point. Recently, AI excelled predicting at the toxicity of chemicals in animals. However, it floundered at picking the winner of the FIFA World Cup.  Understanding the root causes of these scenarios is important for professionals looking to leverage AI.

Connected with the above, it is also important for professionals to recognize the bias in datasets upon which AI learns which can lead to equally biased results. For example, the COPAS Parole Algorithm received negative press when it was discovered that the software predicting the future of criminals was biased against African Americans.

We follow them pretty closely, as we work with verticals where predictive technologies are pervasive. In financial services, for example, predicting fraudulent transactions is a common use case.  In Autonomous Vehicles, predicting traffic flow and pedestrian behavior is important.

Would most businesses turn to AI eventually for better performance?

As AI increasingly tackles work that can be automated, business will turn to it for purely economic reasons.  Too much $$ can be saved (and generated) through AI for it to be ignored.

Recommended: Will Business Development Ever Be Automated?

Elaborate on your playbook for better client-facing interactions? How do you pass the benefits of your real-time analytics to customers and tech partners?

It is important for us to articulate that our platform as facilitates collaboration as opposed to outright automation.  And that this collaboration allows our customers and tech partners to develop deep learning models in a quick and more powerful manner, reducing their time to market.

How potent is the Human-Machine intelligence for businesses and society? Who owns Machine Learning results?

The impact is profound, from increased levels of automation, to faster and more accurate predictive capabilities, to even artistic and creative tasks via the burgeoning field of computational creativity. With respect to the latter, the law (in most jurisdictions) states that the machine’s creator owns any creative output that machine produces. But, as the gap between creator and created widens, this will likely become a contentious issue. For example, if Engineer ‘X’ creates an application that generates poetry, but Engineer ‘Y’ actually trains and initiates the program to produce Poem ‘Z’, who claims ownership?

The Good, Bad and Ugly about AI that you have heard or predict –

What AI start-ups and labs are you keenly following?

Numerous academic labs – The Vector institute at the University of Toronto (The Vector Institute for AI) The Waterloo AI Institute, MIT, Stanford, and Berkley.

What technologies within AI and computing are you interested in?

Deep Learning, as it is our primary focus.  I also follow developments around AGI (Artificial General Intelligence), as well as applications of AI on the pure sciences (theoretical physics, superconductors, etc.).

As a tech leader, what industries you think would be fastest to adopting AI/ML with smooth efficiency? What are the new emerging markets for AI technology markets?

In our experience, the fastest adopters for deep learning are Autonomous Vehicles and Consumer Electronics.

‘Format Painter’ in Microsoft Office (Word, Excel, PowerPoint). Can’t believe I only discovered this time-saver one year ago…

Tag a person in the industry whose answers to these questions you would love to read:

Geoffrey Hinton, often considered the Godfather of AI. The rare combination of brilliance and humility in equal parts.

Thank you, Sheldon! That was fun and hope to see you back on AiThority soon.

Thank you Ron! That was fun and hope to see you back on AiThority soon.

Sheldon is a seasoned executive with deep and expansive academic and professional background across a myriad of subject areas: Computer Science, Enterprise Architecture, Product Development, Artificial Intelligence, philosophy, theology, philanthropy, Creative Writing, and Entrepreneurship. An abiding Renaissance man in an era of specialization; technologist, philosopher, teacher, and wordsmith rolled into an enigmatic but effervescent whole.

Founded by renowned academics at the University of Waterloo, DarwinAI’s Generative Synthesis technology represents the next evolution in AI development, demystifying the complexities of deep learning neural networks while unraveling their opaqueness. Based on years of distinguished scholarship, the company’s patented platform enables deep learning optimization and explainability, with a special emphasis in enabling AI at the edge, where computational and energy resources are limited. To learn more about DarwinAI, visit their website at www.darwinAI.com or follow them @darwinAI_ml on Twitter. 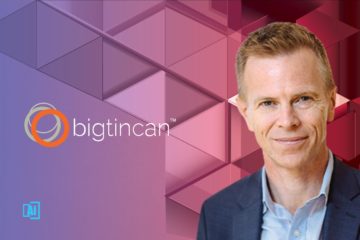