SIGGRAPH 2018 to Debut Immersive Pavilion With Vrcade and Village

As virtual reality (VR) expands into the consumer market, and augmented reality (AR) and mixed reality (MR) get ready for prime time, SIGGRAPH 2018 stands as a prime place for these emerging media and experiences to offer a glimpse into the future from innovators around the globe. Cementing its status at the cutting-edge, SIGGRAPH 2018 will feature a brand-new space: the Immersive Pavilion. The Pavilion is devoted exclusively to these three mediums and will contain: the Vrcade, a space for VR, AR, and MR games or experiences; the well-known Village, for showcasing large-scale projects; and, the VR Theater, a storytelling extravaganza that is part of the Computer Animation Festival.

“We are so excited about the new Immersive Pavilion — it will instantly become the place for our attendees to experience, play, and learn about the latest technological advances across all areas of these rapidly emerging media platforms,” said SIGGRAPH 2018 Virtual, Augmented and Mixed Reality Chair Pol Jeremias. “This year’s VR and mixed reality offerings will include innovative experiments, research, games, music videos, and more that are focused on the exploding and immersive interactive experience.”

Highlights of the 2018 Virtual, Augmented and Mixed Reality program include:

Wolves in the Walls: Chapter 1 (Vrcade)

Peter Billington and Jessica Shamash, Fable Studio. Hailing from a new studio that recently join content creation for virtual reality cinema, not everything is at it seems when 8-year old Lucy’s imagination proves to be a reality. “Wolves in the Walls” is an immersive fable that asks; what would it be like to interact, have a relationship, and go on a quest with a character inside a virtual reality movie?

Si ying Diana Hu and Niniane Wang, Niantic, Inc. As the creators of Pokémon Go, Niantic takes AR to the next level by enabling multiple mobile devices to experience the same AR objects in real-time! Watch people play pong against each other, where the ball and paddles exist in AR for all users. Shared AR experiences is essential for keeping AR mainstream in the future.

Larry Cutler, Eric Darnell, Nathaniel Dirksen, Michael Hutchinson, and Scott Peterson, Baobab Studios
“Crow: The Legend” is a re-telling of a Native American folktale about a bird with the most dazzling plumage and mellifluous voice, who, after the planet turns dark and cold, must journey far from home to bring light and warmth back to the world.

ACM, the Association for Computing Machinery, is the world’s largest educational and scientific computing society, uniting educators, researchers, and professionals to inspire dialogue, share resources, and address the field’s challenges. ACM SIGGRAPH is a special interest group within ACM that serves as an interdisciplinary community for members in research, technology, and applications in computer graphics and interactive techniques. SIGGRAPH is the world’s leading annual interdisciplinary educational experience showcasing the latest in computer graphics and interactive techniques. SIGGRAPH 2018, marking the 45th annual conference hosted by ACM SIGGRAPH, will take place from 12–16 August at the Vancouver Convention Centre in Vancouver, B.C. 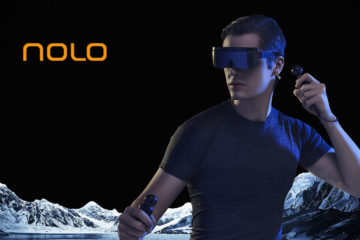 vSpatial, the Virtual Reality Office, names John Sallaway as its new CEO, Chairman of the Board